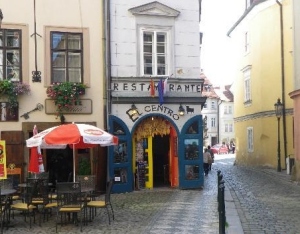 “Your logic defies me, but we’ve been in Prague for less than two hours and our first meal is going to be in a Spanish restaurant?” He asked.  “And why not?” Me replied.

Notwithstanding the uneven cobblestones and traffic, we were essentially a hop-skip-and-a-jump from our hotel, jet lagged-hungry and some tapas and sangria seemed like just the thing.

With four more nights ahead of us to explore more traditional cuisine, the brightly colored entrance to El Centro beckoned and the smiling young gent at the door was all the assurance we needed that we were headed in a good direction.

As our time in Prague went on it became apparent just how many young men from around the world had fallen in love and married a beautiful Czech girl. As they planned to start families and these young men found themselves following their loves home to her native country to be surrounded by her family and friends. Ergo and happily, Prague has become a city of ever growing international cuisines.

El Centro is welcoming, earnest and a good choice for Espanol Praga.  With a location equally accessible between the old and new towns, stop by, sit down and enjoy!